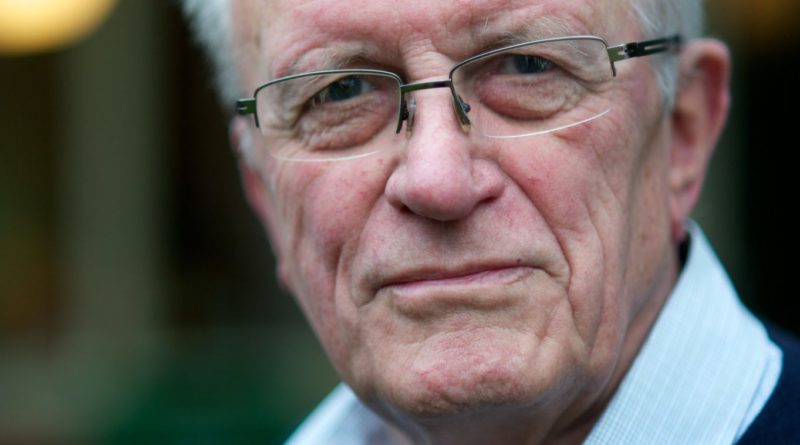 It is with profound sadness we inform you of the passing of Prof E.P. Köster (emeritus Professor) who was Professor of Fundamental and Applied Research of the Chemical Senses (1971-1993) and of the Psychology of Food Behavior (1993-1996) at Utrecht University. Prof. Köster, also referred to as “Ep” lay the foundation of human chemical senses research in the Netherlands and beyond. Ep was also one of the founders of ECRO, the European Chemoreception Research Organization, in 1970 of which organization he is an honorary member.

Importantly as well, Ep and Howard Moskowitz were the original editors of Chemical Senses, the flagship journal of Achems (Association of Chemoreception Sciences). Their first editorial appeared in 1974, in Volume 1 Number 1 of the journal (https://doi.org/10.1093/chemse/1.1.3).

In 2019 our organization, NOSE, organised a special session at the meeting of the Dutch Society Of Brain And Cognition (NVP) to honour Ep’s contribution to olfactory science and to thank him for his inspiration for the scientific study of the relation between olfaction, cognition and behaviour. At this meeting he received an “olfactory” award: a perfume specially designed for him by perfumer and neuroscientist, Spyros Drosopoulos. The perfume was inspired by Ep’s work, his personality and some of the olfactory notes he used in his work. It was the first-ever award that can only be appreciated through the sense of smell, and so the audience attending the session shared the pleasure of sniffing this delightful award which was dispersed across the room.

We remember the first words of Ep in his addressing the audience of this session: “Ha ha ha ha ha ha!” Ep referred to the fact that some of his colleagues in Experimental Psychology had laughed at him when he – it must have been in the 1970’s- announced that he would devote his perception research to the sense of olfaction, not taking this topic very seriously. “Now it is my turn to laugh at THEM.”. Ep mentioned that, back then, only Nico Frijda, who was working in the area of emotion, understood Ep’s choice and was supportive. Both would become world-famous in their respective fields in the years that followed.

This story highlights two of Ep’s characteristics: a sense of humour, and a perseverance in an area he believed in. Many of us can relate to Ep’s sense of humour, sometimes difficult to follow, but always making you smile and think. And we now know, through the work from Ep and his students, how the sense of smell is entwined with our emotions. It is ethereal, important, directly linked to behaviour and very difficult to study.

Besides to olfaction, Ep has also contributed to the fields of sensory analysis and food consumer science. He always favoured a strict scientific and methodological approach. Many a study was dismissed by him on grounds of methodological weakness or scientific ‘nonsense’. His work with Per Møller and Jos Mojet on the “Misfit” Theory of Spontaneous Conscious Odour Perception (MITSCOP) highlights the importance of ecological validity. Ep believed scientific studies should be about something real, i.e. they should address (everyday) behaviour. Telling is Ep’s comment that “Fundamental research is difficult, but applied research is much more difficult”. Another remark reflects Ep’s unrelenting critical attitude towards most ongoing consumer research: “In the old days, some 65% of new food products failed on the market, then the market researchers arrived on the scene,… and now it is 85%.” A bit exaggerated perhaps, but it clearly highlights his view on consumer food research. His 2003 paper on “The psychology of food choice: Some often encountered fallacies” is a very well cited paper. Ep started displaying a critical attitude to much traditional consumer research long before the now dominant view that many food choices happen automatically and are not easily accessible to conscious elaboration by consumers themselves. Everybody who has ever had a scientific chat with Ep knows how he used to emphasise implicit processes and the unconscious nature of most olfactory perception. As said, all this makes olfactory, but also food choice, research very difficult, as well as expensive. “Good research is costly, but cheap research even more so” another great statement from Ep, referring to the fact that it is not uncommon that million-dollar decisions are based on bad research.

Besides being a remarkable and visionary scientist, Ep was a brilliant lecturer, who was able to completely captivate his audience and is still remembered by many for this.

We mustn’t forget about a whole different side of Ep that was equally important to him, especially when he was younger, though it is lesser known fact. Besides a successful academic Ep was an artist; an award winning poet to be precise and he often referred to this fact to those who knew him well. He was literarily involved with De Luis (The Lice) and the famous Dutch movement ‘De Vijftigers’. In this period he also befriended the renowned architect Gerrit Rietveld, who lived next to him in Utrecht, and the poet Lucebert. In 1955 Ep published a collection of poems with images by William (later Dirkje) Kuik called ‘Kruisiging in Utrecht’ (‘Crucifixion in Utrecht’) based on paintings by the famous James Ensor. While many poems were lost, some were (re)published in 2013 by De Utrechtse Boekhoudpers. Ep had wanted to continue down this road but -luckily for anyone studying the sense of smell- decided to become a scientist instead. In both capacities he touched minds and hearts.

Ep laid the foundations for an applied psychology of smell and taste and in doing so he left a legacy. He has inspired many scientists to embark on a career in these areas. They, and their students again, will continue to reap the fruits of Ep’s vision, for decades to come.

We remember him fondly,

Thanks to Didier Troitier, Annick Faurion and Claire Murphy for their contributions