A Canon of Dutch Heritage Smells

We all have a personal smell as unique as a finger print. So do cities and countries. Food, nature, endemic plants, rituals, factories and impactful events such as wars: they shape our aromatic heritage. Scents are also fleeting and tend to disappear. Yet smell is an important – often forgotten – part of our material culture and identity.

Smells are known to be the strongest inducers of early memories, ánd of historical sensations. By describing and reconstructing this invisible cultural aspect, we can revivify our past in a more emotional, meaningful and complete way.

What follows is a selection of Dutch heritage smells, most of which are on sniff at Vrije Universiteit Amsterdam during the exhibition ‘Aromatic Art (Re-)constructed – In Search of Lost Scents’ (dd. 24/02 – 23/05/17) as a result of the PhD-project by NOSE member Caro Verbeek. 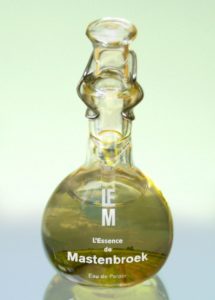 Statement from the artist:

The residents in the Dutch polder Mastenbroek- primarily dairy farmers who have been working in the polder for generations- volunteered to participate in the Essence club. As members of this club they sourced the essential elements that would eventually make up L’Essence de Mastenbroek.

Since its launch in 2005, the perfume has been sold across the globe. This fluid polder has travelled to far-fetched outposts of the world and mingled with global landscapes, the desires and even the memories of individuals and communities who heve never stepped foot in Mastenbroek.

The source of L’Essence can be traced to one of Mastenbroek’s three waterways, resting on a hillocked foundations of an abandoned farm. Once a year the source is open to the public and anyone who has ever purchased the perfume can refill their bottles for free.

For more information and to purchase a small (3ml) or big (50ml) bottle, press HERE

‘Essence de Mastenbroek’ is also the olfactory logo of NOSE. It captures the smell of an endangered type of Dutch landscape and is therefore part of our volatile heritage.

This is the highly recognisable scent of cigar boxes, the heavy furniture of our (grand-)parents, moth balls, church interiors, and for those of us who grew up without digital media, sharpening pencils in Kindergarten.

‘Tulip mania’ reached its peak between 1634 and 1637. The imported flower (from the Levant) became the symbol of the Netherlands and still is. The wealthy inhabitants of Amsterdam placed tulips in flower pyramids to adorn their houses visually, but most of all olfactorily!

Napoleon Bonaparte was finally defeated on June 18th 1815 by a coaltion of British, Dutch and Hanoverian units. The French emperor was known for using liters of Eau de Cologne (4711, or in Dutch, Boldoot), which was rather a medicine or ‘cure-all’ before it became a perfume. His olfactory aura must have mingled with gun powder, blood, the smell of fear, and horses. IFF perfumer Birgit Sijbrands created a perfume to commemorate the famous episode in European history for the Rijksmuseum in 2016.

A typical scent related to Amsterdam and other big cities in the Netherlands from the 17th century to the present day. Lime trees (Tilia) were planted by the city council to mask the hideous odours of the many canals which were used as open sewers. The following is a Dutch poem from 1662 by Melchior Fokkens:

Hundreds of elm and lime trees in Amsterdam still commemorate this aspect of our olfactory history.

The linen closet was the pride and joy of every wealthy house wife in the 17th century. A branch of rosemary, thyme or lavender, grown in the inner garden,  ensured an agreeable scent but at the same time functioned as an insect repellant. Cultural historian Dr. Herman Roodenburg wrote on the ‘ olfactory gaze’ in relation to this painting by Pieter De Hoogh: any contemporary viewer probably instantly understood the olfactory dichotomy of the canal (visible through the open door) and the sweet smelling textile handled by the two women on the foreground. The use of lavender as as a repellant is ancient: in Roman Antiquity it was added to textile for the same purpose.

In history – until at least the 20th century – inhabitants of Amsterdam were constantly confronted with a mossy dampness in their houses. In order to get rid of both the moist and the smell, resins and sweet spices were burnt in the fireplace and designated burners and perfumes were put in potpourri dishes. Yet the smells from outside, of the canals (used as a sewer), horses and the fresh fragrance of lime trees were inevitable. In 2016 IFF perfumer Birgit Sijbrand created a fragrant composition that represents both the smell from the interior and the exterior of a house along the canal for the Rijksmuseum.

One of the more unexpected smells of World War II during the bombings of Rotterdam was that of grass. According to several nose witness reports earth and grass were scattered after impact, scenting the air.

In 1965 the famous Dutch Fluxus artist Wim T. Schippers presented an empty white-papered room, lit by a single light bulb, and furnished with a dozen chairs. There was nothing to see, nothing to do, except inhaling the narrative of four different smells, that each had a specific meaning. The “program of smells” started with the fragrance of oranges, followed by that of crayon, referring to school life (the smell of cedarwood), after which there was an odorless break. Anise – a smell related to child birth – preceded the grand finale: the animalistic and erotic smell of musk. Schippers was the first Dutch artist to consciously address olfaction.

In the sixties the same artist created another olfactory work of art with a typcially Dutch scents: he covered an entire floor with peanut butter – which is widely consumed on bread by Dutch people – and simply baptised it the ‘Pindakaasvloer’.

Another renowned Dutch artist known for his use of scent is Job Koelewijn.

Research by psychologist Rachel Herz and other scientists has shown that the more senses we trigger during the act of learning, the more likely we are to remember the material under the influence of the same stimuli, for example during an exam. Job Koelewijn tried to link the sense of smell to the cognitive practice of remembering written language in Text Inhaler. Visitors are invited to stick their nose in the inhaler, to read the single line printed there and to inhale the scent of eucalyptus simultaneously. Koelewijn: “Eucalyptus doesn’t just open up your respiratory system, but it also opens your mind. The next time you experience the same smell, you will have little trouble recalling the words”.

Young Dutch artist Esther Brakenhoff directs your eyes and noses to 1965: the year in which Edward Kienholz created his multi-sensory environment of a bar called The Beanery, which is an iconic part of the collection of the Stedelijk Museum (Amsterdam). The composition includes typical sounds, images and even smells, which was reconstructed on the basis of a letter by his widow. The recipe included ashes, stale beer, moth balls, rancid grease, and last but not least, his own urine. Brakenhoff’s fragrance capsule echoes the clock-shaped faces of the visitors in the original work of art, referring to the volatility of both time and smell.

Interestingly, the odour lingering in bars hasn’t altered that much from the 17th century onwards, at least in the Netherlands. The most fundamental change took place only recently when a smoking prohibition was introduced in Amsterdam in 2004. This means that young people won’t have the same memories and associations when they enter Kienholz’ installation and that the olfactory layer has become part of our disappearing volatile  heritage.

Dutch-Japanese artist Maki Ueda presents national collective smells autonomously. For “Scents of Holland” (2008) Ueda extracted essential oils from goods that are recognized as authentically Dutch, such as cheese, fall leaves (that smell differently in every country because of the level of moist and particular fungi; Jelle Leenes, ‘Hollandse Luchten’  2010), “speculaas” (a spicy pastry consumed during the traditional celebration of Sinterklaas for hundreds of years), hyacinth, and overcooked Brussels sprouts. The latter is only familiar to people over a certain age and now partially lost due to new culinary preferences. This demonstrates that some collective memories are not just linked to places, but also to specific eras. By extracting their essences Ueda reduces the original products to their olfactory essences, deprived of the visual qualities of which is was derived from except for the color and in doing so being able to present them as invisible symbols: “These perfumes are not meant to be worn, but to be smelled for triggering your memories, emotions, and imaginations” (Ueda, 2008)