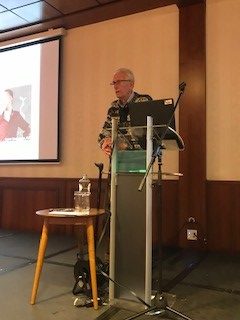 No, it was not a traditional trophy such as a cup, plaque or medal, that emeritus professor of psychology, Ep Köster, received to honor him for his lifetime achievements in the area of human olfaction science. Instead, he received an olfactory award, in the form of a perfume specifically designed for him by perfumer Spyros Drosopoulos. The perfume was inspired by Ep’s work, his personality and some of the olfactory notes he used in his work. It is the first-ever award that can only be appreciated through the sense of smell, and so the audience attending the session shared the pleasure of sniffing this delightful award.

At a special symposium organized on December 20 for Ep at the 2019 winter conference of the Dutch society for Brain and Cognition, olfactory scientists Garmt Dijksterhuis from WUR, Per Møller from Denmark and Maria Larsson from Sweden gave an overview of Ep’s work and how it had influenced their work and impacted the field of human olfaction science. Ep, who became professor at Utrecht University in 1975 and retired in 1996, put research about the chemical senses of smell and taste on the map. For example, it was Ep’s idea to add the odour of mercaptans to otherwise odourless natural gas so people could smell it when there is a gas leak. Because smells can be very effective as alarms, this practice has proven very important in preventing serious accidents, as most people will react immediately and effectively to this odour which they have come to associate with a dangerous situation.

During the meeting, which was chaired by olfactory scientist and art historian Caro Verbeek, the odour logo from NOSE (yes, NOSE has an olfactory logo!) was spread through the room by Jorg Hempenius from Iscent to set the stage. Finally, Ep –now 88- took to the podium to speak a few words. He clearly chuckled when he concluded that a scientific field that few people had believed in when he started it, in hindsight produced so many successes. We at NOSE hope to follow in his footsteps! Congratulations to Ep for an award well-deserved.

We express thanks to sponsors Helmholtz Institute, WUR, WFBR, UU, Iscent and Baruti, and all the contributions from the members of NOSE.